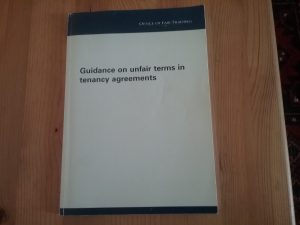 Reform of the private rented sector: the consumer view

This major report by Which? into the private rented sector has only recently come across my desk. The current lockdown and the implications for private tenants will impose major problems for such tenants.

The report, 60 pages in length, is worthy of attention and makes many sensible proposals.

The Consumers Association successfully took the United Kingdom Government to the European Court to become an enforcement body under the unfair contract terms directive. The Association has hardly used these powers and has failed to make super-complaints to the Competition and Market Authority (CMA) to ask them to investigate unfair trading practices in the private rented sector.

It is remarkable that the Association is calling upon the Government to reform the private rented sector when the Association already has its own legal powers to ensure the removal of unfair contract terms that it is unwilling to use.

Enforcement about the removal of unfair contract terms from housing contracts inevitably led to a discussion about the use of standards tenancy agreements.

The Law Commission was tasked with reforming and simplifying tenancy agreements in England and Wales. Unfortunately, only the proposals in Wales reached the statute book (Housing (Wales) Act 2014). Which is asking for reforms that have already been law in Wales since 2016.

All private landlords in Wales are required to use a standard contract and to ensure that the property remains fit for habitation throughout the tenancy.  Landlords and agents must comply with a statutory code of practice.

The Which report and its methodology suffer from a failure to appreciate that the United Kingdom is a federal state composed of 4 countries each of which has a different approach to housing law. It seems strange that the only country in the UK with compulsory licencing for all private lettings and mandatory training for letting agencies is excluded from the mystery shopping exercise in the report.

A failure by a Welsh landlord to obtain a licence has serious consequences. It is a criminal offence. There are restrictions on obtaining possession. A tribunal may make a rent stopping order or a rent repayment order.

Scotland has its own legal system which makes comparisons difficult. However, Scotland is the only country in the United Kingdom that does have rent controls on its statute book though such controls have yet to be implemented. All private landlords in Scotland (though not letting agencies) must register with their local authority.

The OFT was abolished in 2014 and replaced by the Competition and Market Authority (CMA).  The OFT Guidance on unfair contract terms in tenancy agreements was withdrawn and replaced by general guidance. Until recently the CMA has not been interested in tackling unfair trading practices in the residential property market.  Following a critical report in 2019 by the House of Commons Select Committee on Housing, the CMA has opened an inquiry into the mis-selling of leasehold houses. In February 2020, the CMA announced that enforcement proceedings are pending.

In October 2019, the CMA published consumer protection guidance for lettings professionals. According to the Which report there is evidence that such guidance is not being followed. This begs the question why the Consumers Association does not make a super-complaint to the CMA to launch an investigation.

In the Which report, despite the discovery of unlawful contract terms in tenancy agreements, there is no discussion or explanation about why this is the case. It would be useful to know how their continued use could be prevented.  The solution is to have some type of model tenancy agreement. Disappointingly the report does not mention the work done by the Law Commission.

There is no mention of how the Consumer Rights Act 2015 has helped housing consumers if at all. There have been marginal improvements to the treatment of unfair contract terms in consumer contracts. This act was a major reform of consumer law. What did the Consumers Association ask the Government to do to help housing consumers?

Enforcement of the criminal sanctions for non-compliance appears to lie with local trading standards officers and the CMA. Some local councils such as Nottingham and Tower Hamlets are already using these powers in dealing with rogue landlords.

There are rights to civil redress. Assured and assured shorthold tenants who are victims of unfair practices can unwind the contract, seek a discount and damages. The Shelter website describes how these regulations apply to assured short hold tenancies where the tenancy was signed up because of a misleading or aggressive practice. Such tenants can terminate the contract and be released from any obligations under it. However, the rules are complex.

Many of the changes to consumer law originate from European legislation. Now that the UK is leaving the European Community discussion on this issue would have been helpful.