On 12 February 2020, Hilary Benn, the Labour MP for Leeds Central, hosted a short but significant parliamentary debate in Westminster Hall on unsafe cladding in residential accommodation occupied by leaseholders. The debate looked at the development of Government policy to deal with fire safety in private blocks since the tragic fire at the Grenfell Tower block on 14 June 2017.

Leaseholders save up to buy their flat only to discover that the cladding is dangerous. Some of these purchases will have received assistance from the Government’s help to buy scheme. The Fire Brigade tells residents in the block that they must set up a waking watch 24 hours per day to patrol the block. If they do not do so, they must vacate the block. In one block in Leeds such a watch is costing each flat-owner £670 a month plus VAT on top of mortgage payments and service charges.

The leaseholder may then be asked to meet the cost of putting in a fire alarm. Then to their absolute horror they are asked to pay for the cost of replacing the dangerous cladding to make their home safe. They simply do not have that amount of money. Their flat becomes worthless and they cannot remortgage. The UK Cladding Group has reported insurance costs for these blocks going up from £40,000 to £200,000. Leaseholders run the risk of becoming bankrupt, and if they work for the police or are lawyers they will lose their jobs as well.  They will become homeless. This is not a situation of the making of leaseholders. They are the innocent victims of Government policy.

In May 2019 the Government set up a fund of £200 million to support the removal of ACM style cladding from private residential blocks to protect leaseholders from bearing the cost. Leaseholders in blocks with other types of cladding were excluded. However local fire brigades do not differentiate between ACM and other forms of cladding that are equally dangerous. They take the view that there is no difference between different types of cladding if they were dangerous. In January 2020 Government Ministers were talking about loans to leaseholders to pay for cladding removal. This was a clear departure from the Government’s previous position that leaseholders should be protected from paying for these costs. 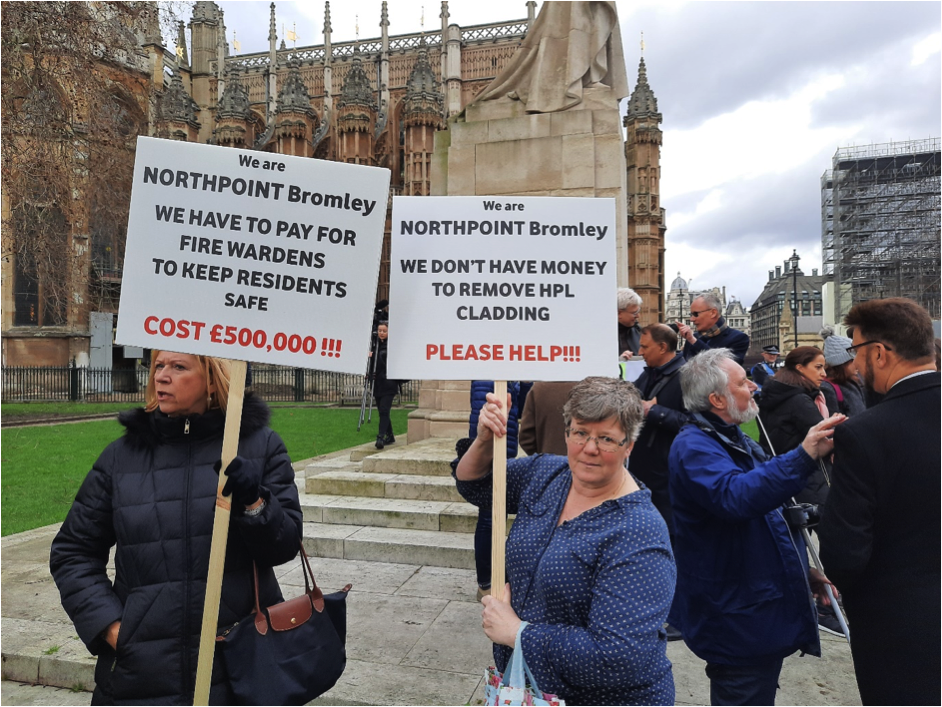 Leaseholders from Northpoint in Bromley, South East London demonstrating outside Parliament on 25 February 2020.

MPs from all parties and all parts of the country queued up to contribute to the debate. They reported problems with privately owned blocks in Leeds, Manchester, Sheffield, Liverpool, London, Birmingham. Ellesmere Port, Ipswich, Newton Abbot and Glasgow.

14 MPs from London spoke in the debate. In Greenwich and Woolwich 20 privately owned buildings were found to have ACM cladding. Greenwich Council has found at least 24 buildings with high pressure laminate cladding. In many cases the property is no longer owned by the original developer. The new Labour MP for Putney, Fleur Anderson, reported 2 blocks in her constituency with cladding that is a mix of ACM and HPL. Her constituents have been informed that their liability will be between £50,000 and £80,000 per flat!

Scotland has an unusual problem. Even though there is no leasehold/freehold distinction north of the border, the Scottish Government has limited influence on the actions of mortgage lenders since this power is reserved to Westminster. The London Government has issued an advice note that deals with fire safety in buildings post Grenfell throughout the United Kingdom. Even though building standards are higher in Scotland than in England, lending organisations now require home inspection reports to reflect the new London imposed standards. Consequently, some leaseholders in Scotland who wish to sell or remortgage have found that they have been imposed with a nil valuation.

Sarah Jones, MP for Croydon Central, responded for Labour’s front bench. Nine in ten private blocks with Grenfell-style cladding are still covered in cladding.  Government data indicates that 75 private block owners do not even have a plan to remove this cladding. Labour has for years called on the Government to legislate to ensure that building owners cannot pass costs on to innocent leaseholders. The Government cannot justify the distinction between ACM and other forms of cladding.  In November 2019 fire swept rapidly through a student accommodation block in Bolton with fortunately no fatalities. The block had non-ACM cladding.

Ministers have failed to audit residential blocks, so the public do not know how many blocks are still covered in non-ACM but still dangerous cladding. According to Inside Housing the façade materials of 3,708 out of 5,320 tower blocks has yet to be established. The Government announcement in December 2019 that the height limit for removing ACM had changed from 18 metres to 11 metres means that potentially more blocks and leaseholders are covered. The Minister declined to answer the question whether the Government even knew how many blocks will now be covered by this rule change or why it took the Government over two and half years to make this decision.

Esther McVey MP responded for the Government as the then Housing Minister with the clear knowledge that she was about to be sacked from her position. Legislation is promised in a new fire safety bill.  Discussions are pending with the Treasury to increase the size of the fund. The Government has failed to name and shame the freeholders of relevant blocks with unsafe cladding.

The situation is about to get worse for the new Housing Minster. Leasehold Knowledge Partnership are now pointing out that Government answers to Members of Parliament do not accurately reflected what is happening on the ground.

Why is this issue of political importance for Labour? John Healey MP, the Shadow Housing Minister, has pointed out that Labour has double digit lead over the Tories on housing. Amongst owner -occupiers the Conservatives poll better than Labour. If Labour can persuade one conservative owner-occupier to change their vote, this will increase Labour’s poll lead even further. The Tories are too close to the interests of property to tackle this issue effectively.< The difficulties that leaseholders face on cladding issues is separate from the problems that leaseholders living in houses face who have been mis-sold dodgy ground rents. There is an investigation by the Competition and Market Authority due to be released later this year. Many leaseholders live in parliamentary seats in the North of England that were once held by Labour. The National Leasehold Campaign Group Facebook followers has grown to 16,500 in less than 3 years. The 2019 Labour Manifesto contained positive polices to abolish the leasehold tenure system over the lifetime of the new Parliament. Commonhold would be compulsory for all new builds. All high-rise residential blocks would be made safe. Unfortunately, the problems of leaseholders, despite being a vote winner for Labour is hardly ever discussed at Labour Party Conferences. The Co-operative Party fringe meeting on leasehold reform at the 2019 conference was a welcome exception. If Labour is ever to win another election, the new Party leader needs to come out positively on the side of the 5 million leaseholders in England and Wales. S/he must work collaboratively with senior shadow Cabinet figures. There should be an Opposition debate in the Commons on this issue as well as a party-political broadcast. With over 580,000 party members, Labour should consider using the talents of these members to set up support groups for leaseholders in relevant areas such as the North West. The party needs to produce maps of where leaseholders live and in which parliamentary constituency. Work is needed to expose the links between the Tory Party and freeholders such as David Cameron’s brother in law. Sympathetic lawyers should be contacted to draft possible legal solutions.