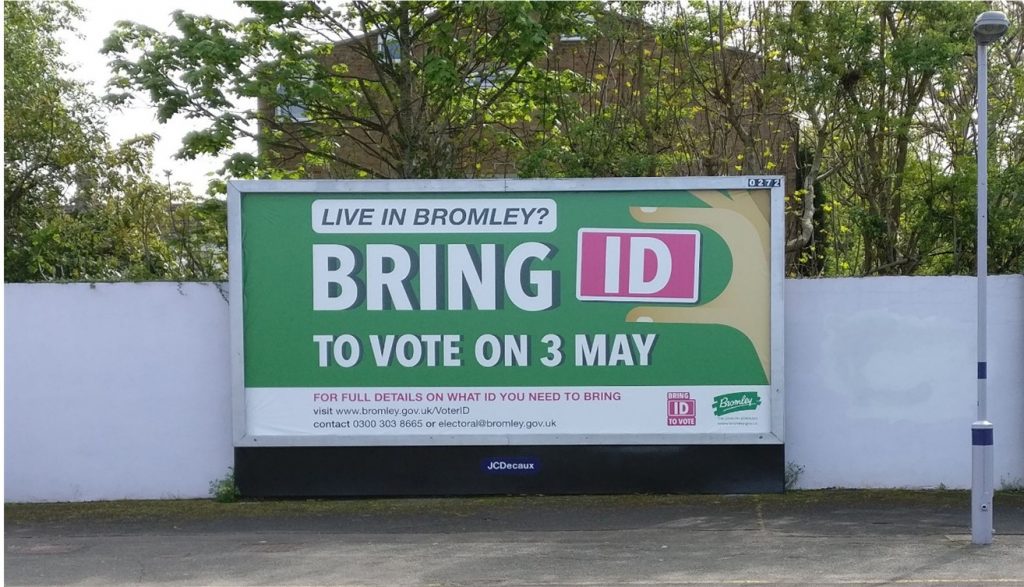 The Queens Speech on 11 May 2021 announced that the Government will be introducing a bill into Parliament to introduce a requirement on all voters to produce identification to vote in future elections.  Bromley Council carried out a Voter ID pilot exercise in the local elections in May 2018.All voters had to show identification at the polling station or otherwise they would not be able to vote. (see  bromley.gov.uk/info/200033/elections_and_voting/1177/voter_id_pilot ).

One of the council’s video was misleadinghttps://youtu.be/ow7rB2HNnAk. One of the speakers claims that no ID means no vote. However, there was no requirement for postal voters to show identification at these elections.

The council admitted that 154 voters were turned away from their local polling station for failing to produce any identification. This was a shocking denial of the democratic rights of these voters. Why were these electors denied their democratic rights when the council itself admitted that there has never been any voter fraud in the London Borough of Bromley?  This was a warmup exercise before extending the scheme nationally.

The Equalities Impact Assessment carried out by Bromley Council was staggeringly complacent:

“2011 Census data shows that 77.4% of Bromley residents give their ethnic origin as White British, with about 17% of residents being made up of Black and Minority ethnic (BME) groups.  Bromley has a large Gypsy and Travellers community although this group is traditionally under registered and disengaged with democracy.  94% of Bromley residents speak English.

All racial groups are treated in the same way.  Electors have to provide their nationality on registering to vote as this determines their franchise.  Although there is the potential problem of language or interpretation being a barrier, there is no evidence to suggest that this has caused any problems to date.”

The council was basically not interested in whether or not the 6% of the Borough’s population who did not speak English would be able to read the council’s literature about the voter Id Requirements. Black and Ethnic Minority Groups tend to vote Labour more than Conservative.

Nor was the council particularly concerned about whether voters with learning difficulties or mental health issues would be adversely affected by the ID Requirements. It did not occur to the council that there might be voters who were completely blind and how they would be affected.

“Learning disability and mental health issues – People with these issues may have difficulties in understanding the processes and procedures around the production of ID at the polling station.  However, every effort will be made to ensure that those who request assistance and guidance on the ID requirements are given it (whether disabled or not).

The council’s overall assessment was that the Voter ID pilot worked well, and although the Returning Officer regrets that 154 voters who turned up without ID or the wrong ID did not return to vote, most people in Bromley were aware of, and comfortable with, providing ID to vote.

The council’s literature concentrated on explaining to potential voters that they had to show ID to vote. However, the council did not properly explain to all voters that they could vote either by the use of a postal vote or via a proxy.

Given that men and women have given up their lives in the struggle for the right to vote, the council’s attitude reeks of complacency and shows contempt for the legal rights of local citizens.

The proposals in the Queens speech have been correctly described as total b******s by Ruth Davidson the former Conservative Leader in Scotland. See  www.independent.co.uk/news/uk/politics/voter-id-ruth-davidson-government-b1846779.html. The electoral reform society are equally critical. See www.electoral-reform.org.uk/campaigns/upgrading-our-democracy/voter-id/

The Government could find itself in difficulties if the Supreme Court upholds the legal challenge to the voter ID scheme. See www.theguardian.com/politics/2021/mar/18/supreme-court-hear-challenge-uk-voter-id-trial-2019-election and ukhumanrightsblog.com/2020/06/09/challenge-to-new-voter-id-pilot-dismissed-by-court-of-appeal/ Will the Supreme Court agree to the Government supressing  the voting rights of its citizens ?

Cat Stevens MP for Labour has accused the Government of misleading the public. See labourlist.org/2020/07/the-government-must-stop-misleading-us-voter-id-could-disenfranchise-millions/

“in its post-pilot evaluation, the Electoral Commission said “there is not yet enough evidence to fully address concerns and answer questions about the impact of identification requirements on voters”. And the government does not hold any evidence internally either.”

16-year-old people can vote in non-Westminster elections in Scotland and Wales. Progressive opinion should campaign positively to extend the right to vote for this age group. This will contrast with the Government’s Jim Crow proposals to limit the right of UK citizens to vote.