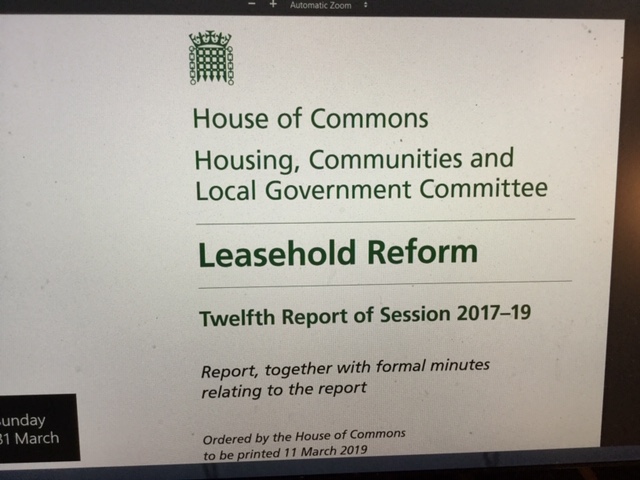 “Too often, leaseholders, particularly in new-build properties, have been treated by developers, freeholders and managing agents, not as homeowners or customers but as a source of steady profit. The balance of power is too heavily weighted against leaseholders and this must change. Our report sets out recommendations for how this might happen”

These recommendations included that:

Leases in English law date back to feudal times. Once your lease expires even if you have paid a lot of money for it, you become a mere tenant of the freeholder. All leaseholders pay a ground rent to the freeholder.

In virtually all other English-speaking countries this form of tenure has been abolished and replaced by some type of communal ownership of the freehold.  The Commonhold and Leasehold Reform Act 2002 introduced the commonhold tenure whereby the freehold title would be shared by all residents in the block. Commonhold failed as it was not made compulsory for new developments and require the agreement of all leaseholders in a block to transfer to this tenure. In practice this was impossible to obtain.

If a leaseholder does not pay their service charges, the freeholder can apply to court to have the lease forfeited and the leaseholder loses the right to live in the property. This feudal practice should have no place in modern Britain.

The Committee were anxious to see commonhold becoming the primary model of the ownership of flats in England and Wales, as it is in many other countries. There is no reason why the majority of residential buildings could not be held in commonhold; free from ground rents, lease extensions and much greater control for residents over service charges and major works.

The Committee were concerned that leading developers had in the past sought to use their dominance to exploit customers through the imposition of onerous ground rents.  They were also disappointed that leading developers were unwilling to respond to their requests for more information as to the number of leasehold properties sold with ground rents exceeding 0 .1% of the value of the properties.

There has been much press coverage of volume builders such as Persimmon and Taylor Wimpey building houses with leases. Some of these properties were sold with dodgy freeholds to third parties. The influential Leasehold Knowledge Partnership estimate that there are 100,000 new build leasehold flats and houses that are unsellable due to onerous ground rent terms.

The Prime Minister is on record as saying that, other than in exceptional circumstances, she does not see why new homes should not be built and sold with the freehold interest at the point of sale. Government figures in 2015/6 estimate that there were 1.4 million leasehold houses and 2.9 million flats. The fact that there are over one million leasehold houses tend to reflect the high profits of leading developers. There is a little need for leasehold houses unless the freeholder wants to use such properties for income generation purposes.

To make matters worse John Healey MP has uncovered official figures showing Help to Buy has been used to purchase 17,586 leasehold homes since 2013. The Government claims that they cannot stop this until the scheme expires in 2021.

On 28 March 2019 the Government announced via a press release that that 40 leading developers had signed “a pledge” to crack down on toxic leasehold deals. Developers will contact current leaseholders with ground rents that double more than once every 20 years and offer them a ground rent linked to RPI.

One leaseholder with a Taylor Wimpey ground rent calculated that under her lease a doubling ground rent is just short of £2 million for the duration of the lease (250 years). Doubling stops after 50 years. If the ground rent was linked to RPI at the current rate of 3.3 % per annuum, the total ground rent is £25.7 million. The fact that some lenders will not provide mortgages for such inflation linked ground rents is ignored.

The pledge will not apply to leaseholders who have sold at a loss to get out of this mess. Nor will it apply where the ground rent has been sold on to a third party. The developers have not been asked to pledge not to build leasehold houses for which they are being subsidised via the help to buy scheme. The Government’s response has been condemned by the Chair of the Commons Select Committee. The response does not address all the recommendations made by the Committee.

This issue is going to run and run especially as many Tory MP’S are concerned at how their constituents are being treated. The select committee received a record number of over 600 responses to their inquiry. The national leasehold Facebook campaign has over 6000 followers. The Leasehold Knowledge Partnership group now believe that leaseholders could in fact form 25% and not 18% of all homes in England.

Even though leasehold reform is often not discussed in Labour circles, politicians cannot afford to ignore the issue. The Government estimates that in 2015/6 there were 4.3 million leasehold dwellings in England. This equates to 18% of the English Housing Stock. In the same period there were 1.4 million leasehold houses and 2.9 million flats. These figures contrast with 4.5 million private rented households and 4 million households who rent from either a local council or a housing association. (See English Housing Survey Headline Report 2017-18).

Leasehold reform should be a rich campaigning area for Labour. The Tories are too close to propertied interests to tackle this issue properly and yet claim to be the custodians of a property owning democracy. On the one hand the Government promises to make commonhold compulsory for new developments and yet cannot immediately stop the help to buy scheme from subsidising developers building leasehold houses with dodgy freeholds.

If Labour is to win the next election, the culture within the Labour Party must change. All sections of the party must recognise that the leasehold housing system is broken and needs to be fixed. Labour should campaign to expose Tory failings and present some of the positive solutions contained in this parliamentary report.