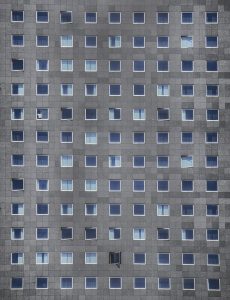 On 14 June 2017, a preventable fire broke out at the Grenfell Tower block. 72 people tragically lost their lives. The aftermath has exposed the appalling scandal of the country’s fire safety system. In  October 2019 the  Inquiry Chairman issued  his Phase 1 report ( www.grenfelltowerinquiry.org.uk/).  This looked at the immediate causes of the fire and the role of the authorities. The AMC fire cladding panels which were meant to prevent the spread of fire had had the opposite effect.

Phase 2 will look at the design of the cladding and wider building safety issues. The inquiry has already heard about the casual approach by the architects in considering fire safety issues.

After June 2017, local fire brigades began to urgently inspect high rise buildings throughout the country. Many buildings were found to have such dangerous cladding that a 24 waking watch system was required to ensure the immediate evacuation of the building in the event of a fire. Research by the housing magazine Inside Housing has found that London has 68% (289) of these waking watch properties. Incredibly this research discovered that the London Fire Brigade had attended 263 fires at these properties since June 2017. Is it only a matter of time before another disaster?

Initially the Government allocated £600 million to deal with the problem of unsafe cladding in properties regardless of their ownership. However, this was only for buildings with AMC cladding above 18 metres.

In February 2020 during a Parliamentary debate, MP’s from all parties queued up to express deep concern about what was happening in their constituencies. In a Birmingham block the work must be completed by November or their insurance will be invalid. Their mortgages will become void, and they will have to leave their block.

The UK Cladding Action Group reported insurance costs for these blocks going up from £40,000 to £200,000. In Putney the new Labour MP Fleur Anderson has constituents who have been informed that their liability will be between £50,000 and £80,000 per flat!

Leaseholders living in these blocks are unable to sell these properties as any buyer must obtain a fire safety report in order to obtain a mortgage. Their properties are in effect worthless. There approximately 500,000 residents living in unsafe properties.

In Croydon, Barratts agreed to pay £2 million to deal with dangerous cladding on the Citiscape block which was built in 2002. The block had to be evacuated as it was too dangerous. The company is paying for the cost of the temporary accommodation. The offshore company that owns the freehold have refused to comment on whether residents must pay for the service charges while the block is empty.

Problems for leaseholders will be made worse in the current emergency. Universal credit only provides a loan after a waiting period to pay for mortgage costs.  While many leaseholders may have above average incomes, they are innocent victims of a defective building safety system.

After a fire cladding protest outside Parliament organised by Andy Burnham, the Manchester Mayor on 25 February, the budget promised £1 billion for safety works. However Inside Housing has calculated that the bill for the social sector alone is £10 billion. The Government still does not have the data to know the extent of the problem.

Further Government measures followed. A recently introduced Fire Safety Bill will place a legal requirement on residential building owners to inspect cladding and fire doors. A new building safety regulator will be established. A duty holder will become responsible for multi-occupied residential buildings taller than six storeys or 18 metres. Sprinklers will be required. Residents will have the right to obtain information about their building’s safety.

Many of these belated proposals are welcome. They reflect successful campaigning by Labour’s Housing front bench and the Leasehold Knowledge Partnership charity. The question of who pays the costs of making these buildings safe is a glaring omission. In Australia flat owners unlike in England and Wales jointly own the whole building. The Victorian state Government provides funding to tackle fire safety issues on condition that the owner transfers ownership to the state. Building costs do not have to be repaid. The state has a comprehensive response to the problem. This is described in by Professor Susan Bright at ( www.law.ox.ac.uk/housing-after-grenfell).

It remains to be seen whether the new normal after the current emergency is over as recently discussed by the Financial Times will be sufficiently different to persuade the Government to prevent freeholders from passing on these charges to hard-pressed leaseholders.

This article was written in the beginning of April 2020. It was published in the magazine Chartist. I will update the article in due course.